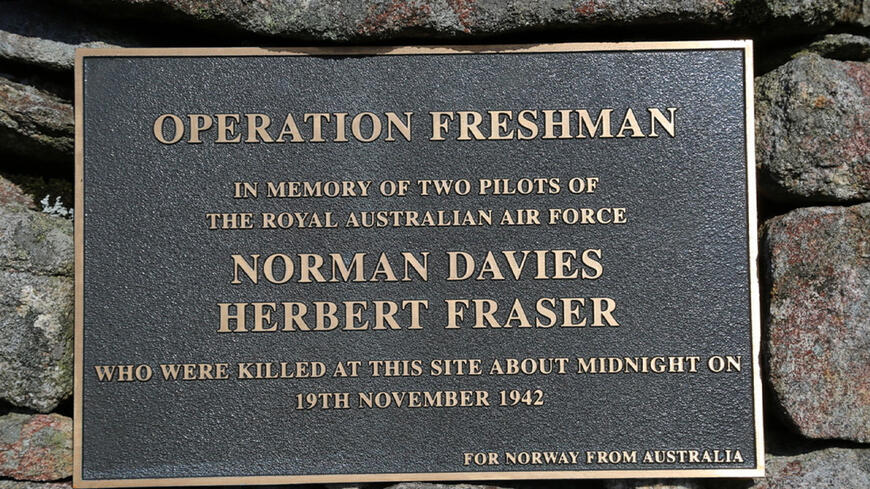 Close to midnight, men working at “Fidjatunnelen” (Fidja tunnel) and local man, Johannes Munkejord heard aircraft engine noises and a loud crash; the exact time was 23:55 according to Munkejord. It is likely that both glider and tug had been having problems with icing as they flew in at low altitude over “Hellelandsdalen” (Helleland valley). The glider crashed northeast of here at Benkjafjellet on heathland belonging to Hovland farm. Three of the crew (including both glider pilots) were killed, three were badly injured, but 11 were more or less unharmed. Two of the latter were sent to look for help. They eventually were directed to Hovland farm, which was the home of the local Lensmann (sheriff) where they were able to explain the desperate situation to Lensmann Theodor Hovland and his son Trond.  Following this, Lensmann Hovland contacted Dalheim School at Helleland - the time was now 03.00!

The school at Dalheim housed a department of the local “Arbeidstjeneste” (AS – local civilian labour service) under the command of Arne Lima from Høyland; Lima and Hovland knew each other well from before. Hovland informed Lima about the British plane crash and asked him to provide some assistance. Lima immediately gathered five men he knew personally and whom he trusted, and they set off for the crash site. The Dalheim camp doctor was unavailable, but his wife was a qualified nurse and joined Lima and the others to provide assistance. However, there were to be more people than this small expedition that went up to Benkjafjellet!

After talking to the Lensmann, the British soon realized that it would not be possible to launch an effective rescue operation without outside help, and this meant it would be impossible to keep the incident hidden from the Germans. Under these circumstances, they accepted the inevitable and prepared themselves to become prisoners of war. The Commander of the nearest German army camp at Slettebø (near Egersund) was therefore contacted and a Germans detachment was soon at the scene. Taking one of the two British soldiers with them as guides, they immediately headed up to the scene of the accident. However, before the Germans arrived, the British had managed to burn their secret documents and maps, something they had told Lima. The Germans gathered the British, who were all in uniform, in an area just below the crash site, then took them down to the farmhouse. There, the three dead soldiers were put into the Lensmann's office while the others were gathered together outside and guarded by the Germans before being driven to the camp at Slettebø.